One of the biggest hurdles that I had to overcome as a new game designer was play test feedback. Who do I listen to at the end of the day? Often when encountering other designers, you’re going to be running up against strong opinions as well. One of the biggest lessons I have learned is that don’t have to commit to making any changes on the spot. You don’t have to be the one that argues the best or who has published the most. Simply you must be the one making the game. Ask designers for feedback and It’s most likely to be something like:

” I didn’t feel like x component wasn’t working because A, B and C. You should remove that from your game. “

You find yourself on the spot, being blind sided by something new or maybe something you have been fighting for a long time. I think it’s best to not get defensive, but try to get people to make their feedback more global. The quote is very specific. The person has played your game once, and of course they know it front to back already. WRONG! They might have the best feedback you’ve ever heard. It might fix your game and get it published, but they don’t understand the vision like you do. If their changes morph the game into something else you didn’t intend, it’s not a fix. If you designed a card game and they want to make it a worker placement, it’s not a true fix. Get them to say the problem in simpler terms like:

I want to interact with other players more than I am right now. “

There are many ways to solve a problem and as a game designer, ultimately you are steering the ship. Don’t let anyone take that from you. Take your lumps and learn from them. Listen to what the problem is and give it a day or two before you rush to make changes.  What seemed so convincing only hours previously sometimes turns to drivel upon closer inspection. When it’s time to make changes, be brave. A quick test with a change doesn’t equal something permanent. It’s common to run into one person saying something idiotic, but if multiple people say it, you might be the idiot. Most play tests have a meta game called “Find the Idiot”, sometimes it’s me.

Lately, I have been making a lot of external changes so that I can get a wider testing pool. I think it’s important for every designer to get feedback from both designers and general game players. Utilize the strengths of both. Currently I’m kind of sick of other designers because it seems like they always want to change things to suit their individual tastes. With 4 Keys I’m really happy with the game as a whole, but I’m making small changes to get the balance right. I feel like I have a lot more to learn from people just playing the game rather than having a philosophical debate about whether my game should be something completely different. I don’t need somebody else driving, I just need people that are willing to play. Good designers ask what type of feedback your looking for before opening the flood gates. Or they can also ask “What are you trying to accomplish with this game?” and base feedback on that. 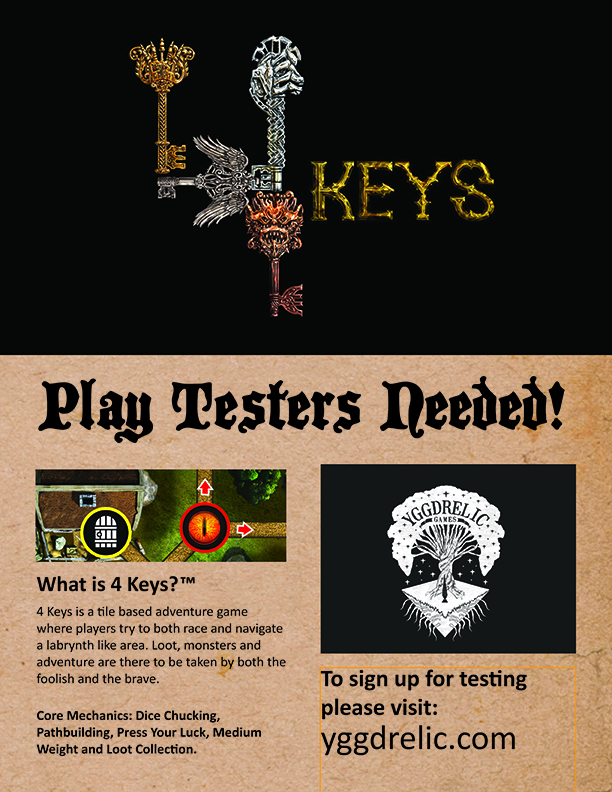 The hunt is on

I have been approaching local card shops with my own little advertisement for play testers and I’m hoping it bears fruit. There are services that will test your game en masse, but I feel like you should be at a certain point before doing so. I like to be present at the test and prefer to not play. This way I can watch players and take notes. Another trick I’m planning on doing is not disclosing that I’m the designer. I’m testing this on behalf of Yggdrelic, what do you honestly think? I’m sure I will be hearing some low blows in the near future. Kids say the darnedest things. 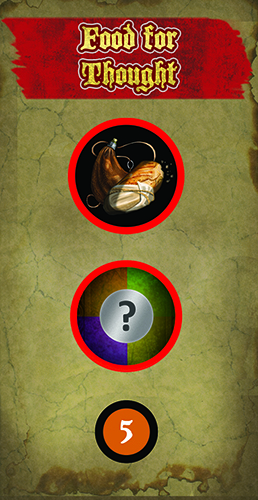 Recently I had one of the worst play test in a very long time. I should have stopped it within minutes of starting, but failed to do so. I don’t really have a great alpha testing group so, I got greedy. If the train goes off the tracks don’t be afraid to hit the brakes. Your testers will respect you for it.

So was the test worthless? Far from it. A bright local game designer Lyle Thatcher gave some feed back that I had never heard before, and did so in a way that was consistent with my game structure.

A big part of why the test imploded was because players were not able to get points easily enough. In 4 Keys the major way players get points is by completing quests. They show up randomly have different point values. Most games all players will get enough points to make the game fun and enjoyable, but this test due to randomness things went very badly. Lyle had the idea to have two separate quest decks. One with low and high cost cards. This small change insures that the front of the game always goes smoothly and is not left up to chance. I’ve played one of Lyle’s prototypes and I feel like he’s going to have success when it’s time to publish.

I’m also currently working on designing a FAQ page to have on the table when people test. 4 Keys is a medium weight game and it can be a lot to learn all at once. I definitely have a lot to improve when it comes to explaining the game to new players.